Ice Hockey in Sweden started between the years 1920-1923 in the Stockholm area. The Premier hockey league was renamed to the SWEDISH-ELIT LEAGUE in 1975-76. There are 4 Premier levels of hockey in Sweden today = the ELITSERIEN (Elite league), the SUPER-ALLSVENSKAN, the ALLSVENSKAN (which has 2 levels) & the DIVISION 1 (North & South) league. The Anton Cup was awarded to the winners of the Swedish championships each year between the years 1921-1952.  From my correspondences with a Mats Lindkvist from Sweden, the Swedish dolls may have come out around 1966-1975. According to him, in Sweden, there is no common name for this type of doll. They call the dolls "nickedocka" or "nickedockor" but mostly they are just called a  "hockeygubbe" or  "hockey figure".

The abbreviation "IF" is commonly used by some of the teams. "IF" is short for Idrottsforening which means "Sports Association" in Swedish.

The dolls were made from the High Skate - small or Intermediate mold. They stand approximately 5 5/8" in height and have a 2 1/4" square base. They have a decal on their chest and base. They have "raised" painted eyebrows and large ears. The skate blades are higher than the 1962 Regular size dolls. This series had "Japan" stamped on the bottom of the base. The Intermediate dolls used a unique spring that had 4 large coils (at the head) with a 1" long stem that attaches to the neck post with 2 small coils. This unique spring design causes a +/- 1/4" variation in the head height. 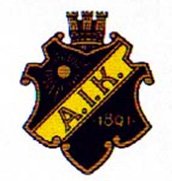 AIK Rats Doll (Swedish hockey) = "AIK" on base is a decal. The chest decal has AIK on a banner and the date "1891". AIK plays in the Swedish Elite-league in the town of Solna (a suburb of Stockholm). AIK was founded in 1891 but the AIK hockey team originated in 1921. 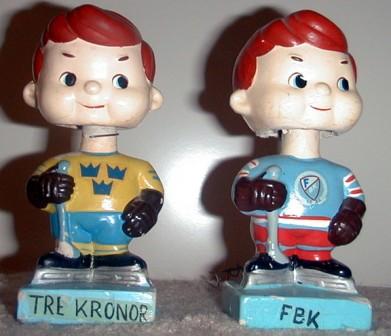 "Tre Kronor" and "FBK" Dolls (Swedish hockey) = Base & chest logos are decals. Tre Kronor, the nickname for the Swedish National team, originated 1938. FBK - (Farjestads BK Wolves) is from Karlstad, Sweden that plays in the Swedish Elit-league. Picture courtesy of Carl and MaryAnn Laron. 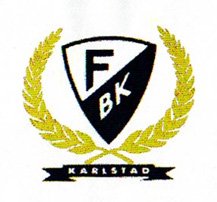 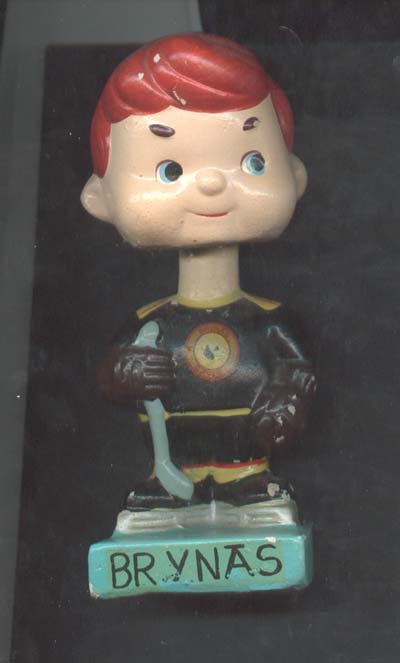 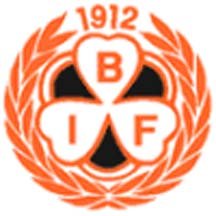 BRYNAS IF "Tigers" Doll (Swedish hockey) = "BRYNAS" on base is a decal. The chest decal has "B I F" on a 3-leaf clover and the date "1912". BRYNAS plays in the Swedish Elite-league in the town of Galve. The Brynas IF club was founded in 1912. They have played for over 40 years in the top Swedish divisions. They started play in the Swedish Elit-League in 1975-76. 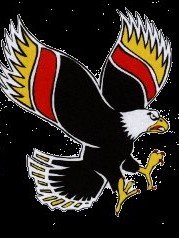 VIK (Vasteras IK) "Black Eagles" Doll (Swedish hockey) = "VIK" on base is a decal. The chest decal has "V I K" in the shape of wings. The Vasteras IK hockey team started playing in 1939 in the top Swedish divisions. The Vasteras IK club was founded in 1913. They started play in the Swedish Elit-League in 1975-76. 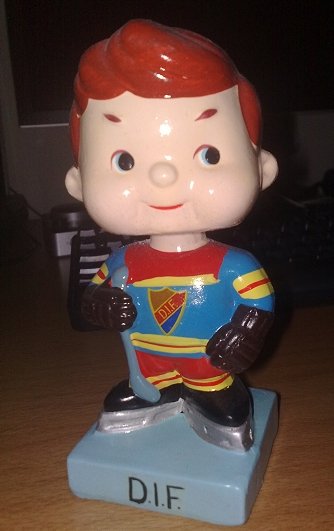 DIF (Djurgardens IF) "Iron Stoves" Doll (Swedish hockey) = "DIF" on base is a decal. The chest decal has "D I F" in the triangular crest. The Djurgardens IF hockey team started play in 1922 in the top Swedish divisions. The Djurgardens IF club was founded in 1891. They are the most successful team in Sweden, having won the Swedish Championships 16 times. They were also European Champions twice (1991 & 1992).

TIMRA IK “Red Eagles” Doll (Swedish hockey) = "TIMRA" on base and chest are decals. TIMRA IK currently plays in the 2nd tier league hockey ALLSVENSKAN  in the town of Timra. The Timra IK club was founded in 1937-38. They play in the Swedish Elit-League from 1956-57 to in 1974-75 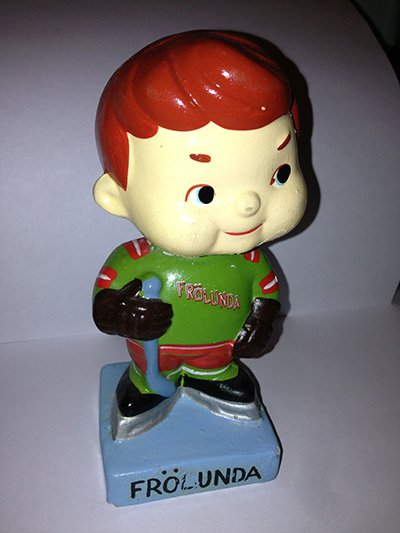 FROLUNDA IF ” INDIANS” Doll (Swedish hockey) = "FROLUNDA" on base and chest are decals. FROLUNDA IF started & still plays in the town of Gothenburg. The Frolunda IF club was founded in 1937-38. They played in the Swedish Elite-League from 1944-1984. In 1984, they changed their name to FROLUNDA HC. The Frolunda HC team currently plays in the highest division of the SHL  (SWEDISH Hockey league).

(Picture added as of Jan 25, 2016 thanks to a friend; M. Lindkvist who lives in Sweden. He has helped me in the past with buying some of the dolls in my collection) 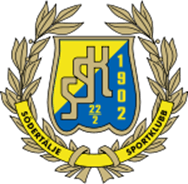 SSK (Södertälje SK) "Blue Lightning’s”  doll  (Swedish hockey) = "SSK" on base and chest are decals. Sodertalje currently plays in the 2nd tier league Hockey ALLSVENSKAN  in the town of Södertälje. The Södertälje SK club was founded in 1902. They have played in the Swedish Elit-League since 1925. Their team crest is shown above. 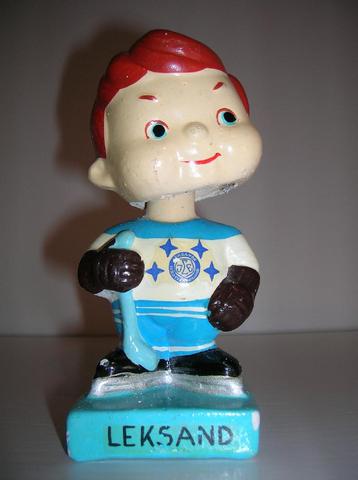 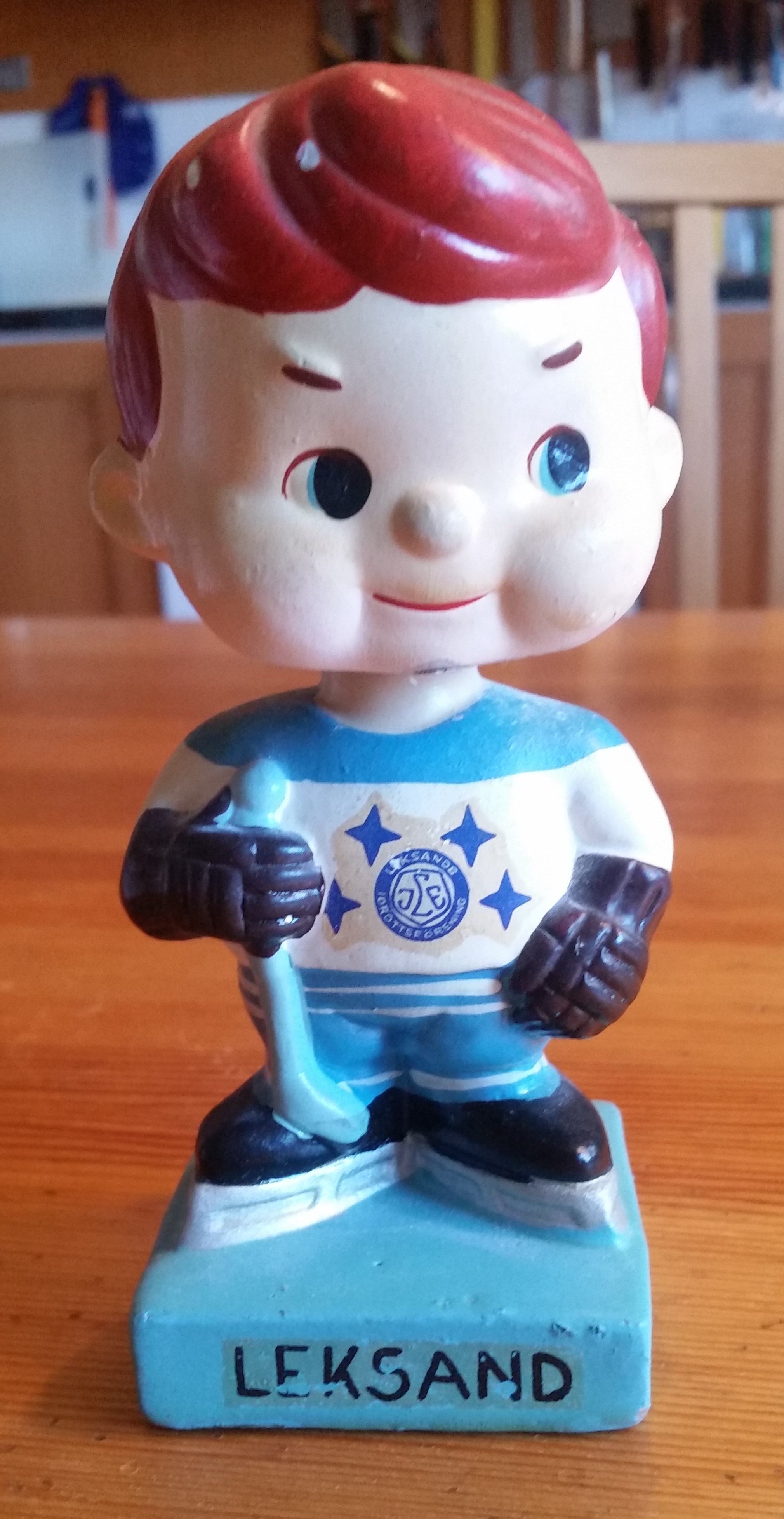 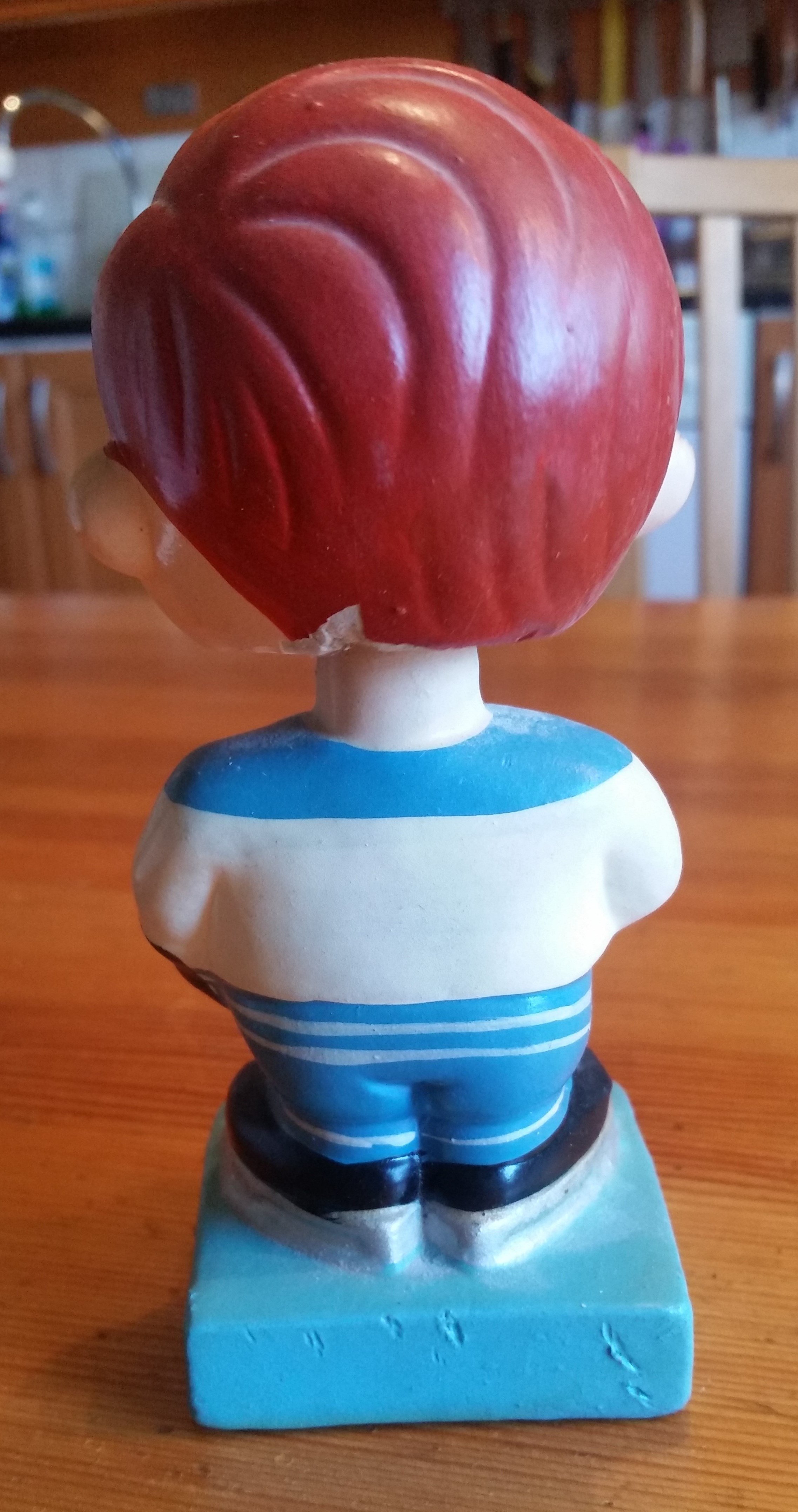 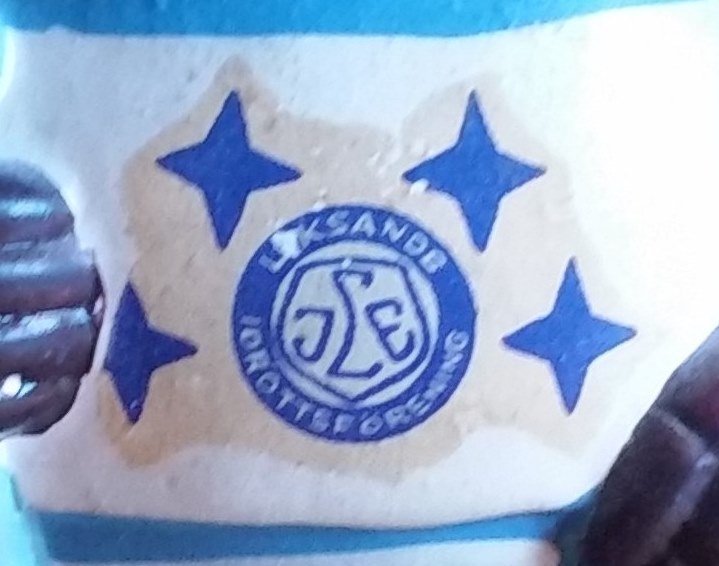 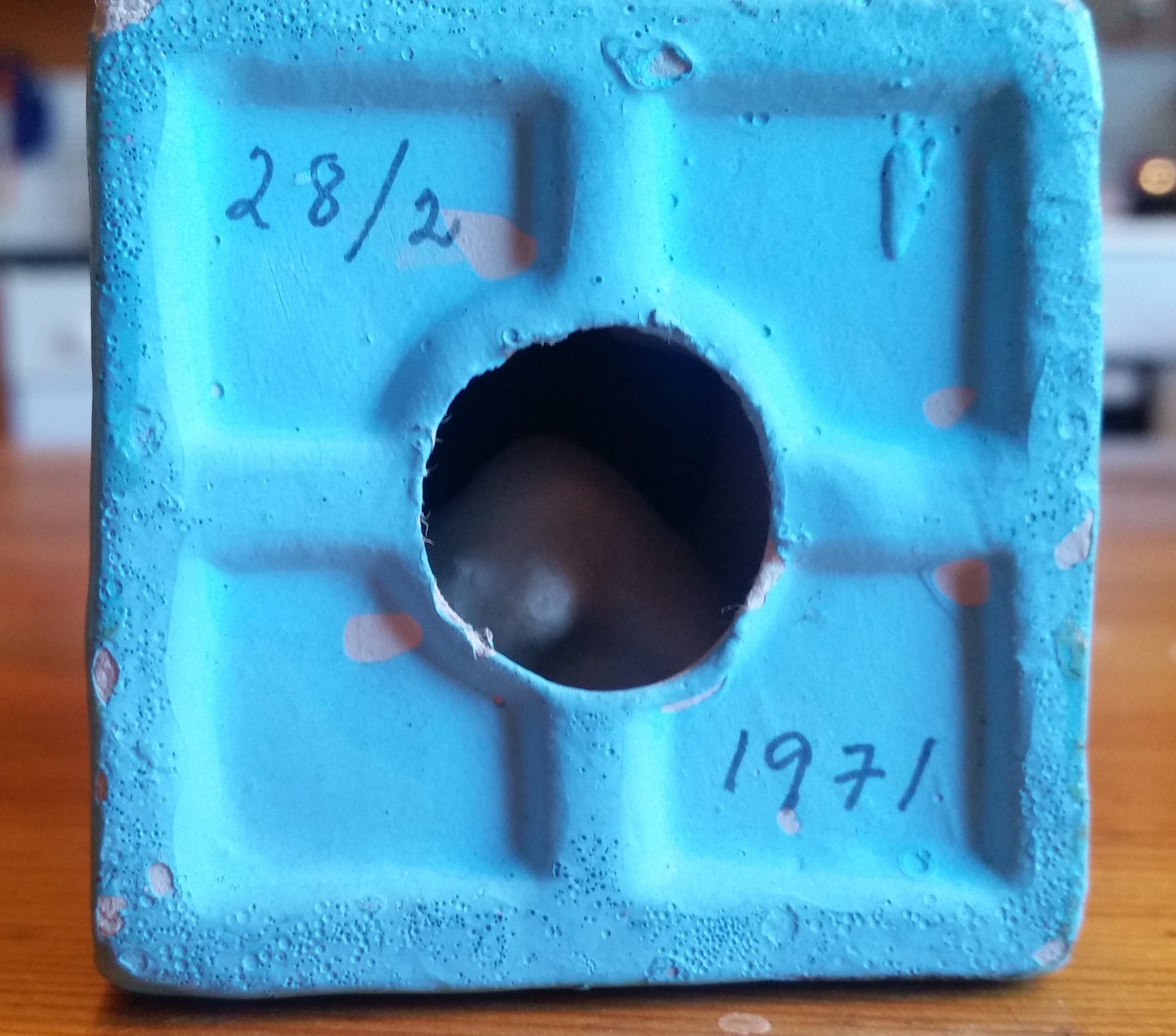 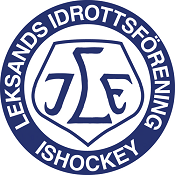 Doll in picture above confuses me. The paint job of the uniform, base color and the chest decal is different than other Leksand dolls in the above pictures. If you look at the emblem, it appears to be similar to the team logo on the right. Also, the team is called Leksand IF on its official websites. That might explain the "LIF" on the base.

If anyone knows anything more about this doll or owns this doll, please email me.

LEKSAND IF  "STARS”  team crest (Swedish hockey) =The Leksand IF club was founded in 1919. They have played in the Swedish Elit-League since 1938. Their team colors are BLUE & WHITE. 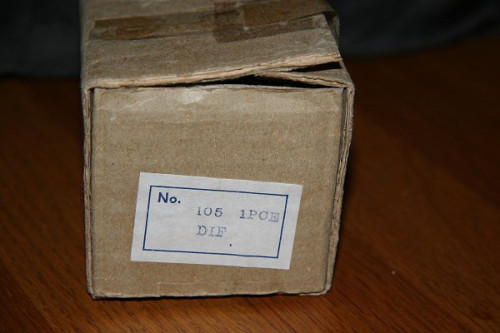 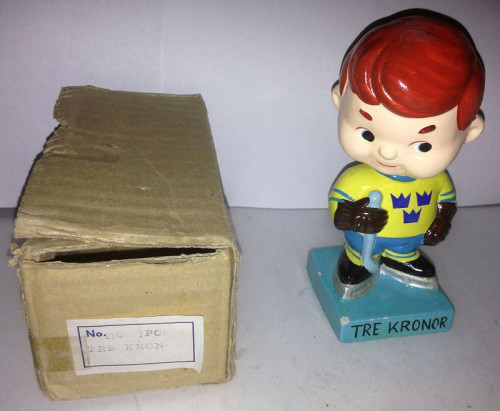 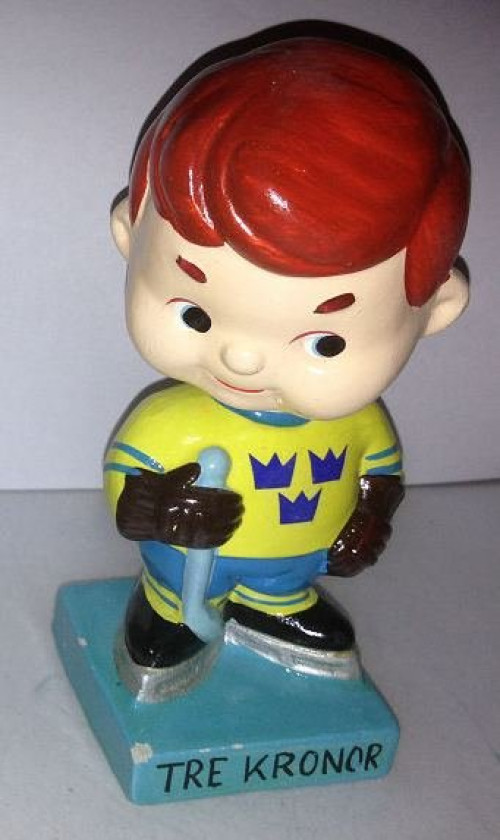 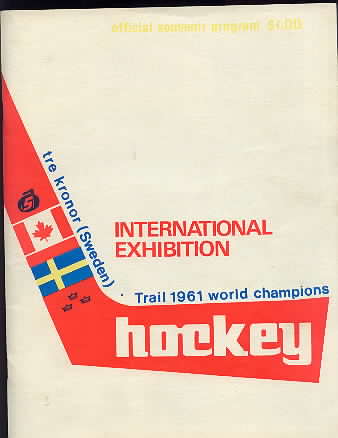 Collection above belongs to Jonas Eliasson from Sweden 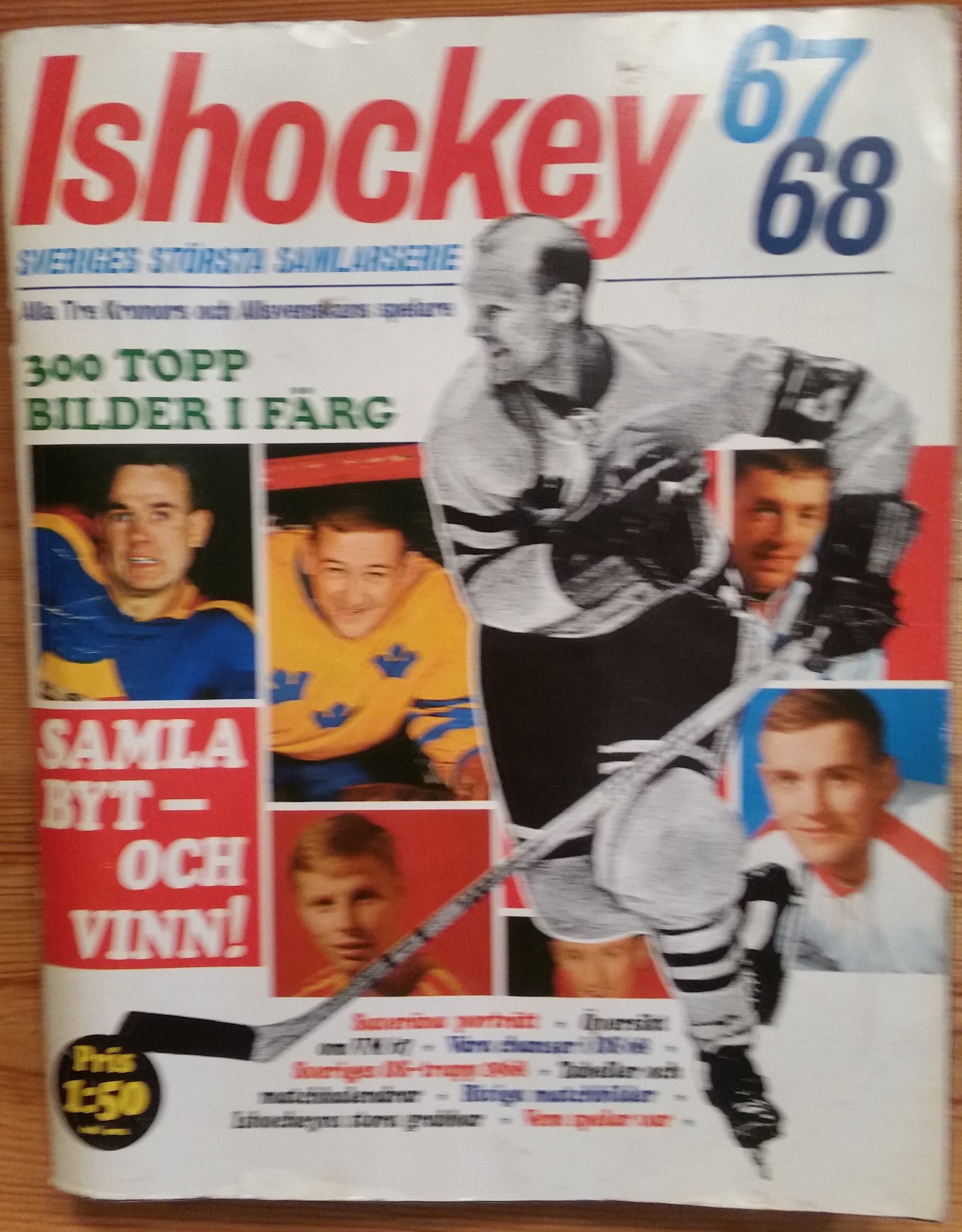 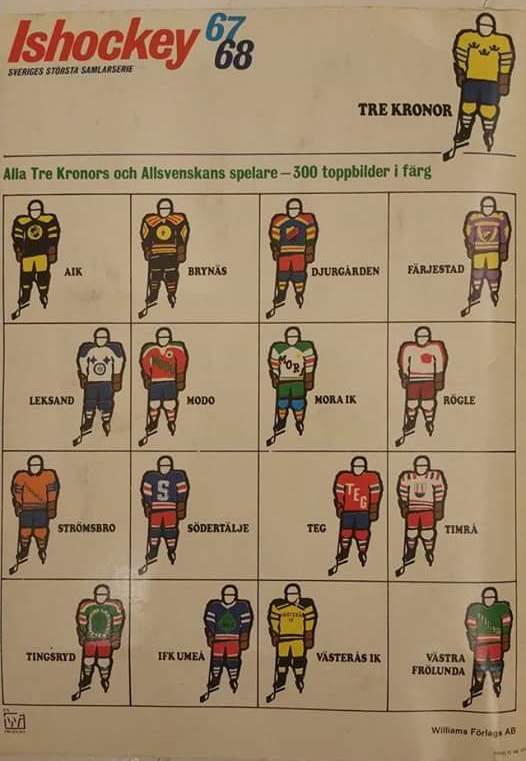 Pictures above are from an Ishockey 67/68 collector's album for cards that shows the 16 teams that were in the league in 1967-68.

The big question is there a doll for each team?