(notice the "A" on the Detroit jersey & chest decals)

As of August 2016, thanks to Normand McDonald from New Brunswick, Canada, I now own all 6 dolls in the "BLINKER" series: 1 for each of the "original 6" teams. I purchased my first doll (Chicago Blackhawks) in June of 2000.  As you can see in all the pictures below, that there was a player and a goalie figure. I have no idea if there is a goalie for each team. I was told by the person that I bought my first doll from that the dolls were part of a promotion by the Laura Secord Chocolate Company from Canada back in the early to mid 60's.  Another reason that they were probably from this time was that the Toronto Maple Leafs chest decal depicted on the doll below; was changed in 1967.  This sticker information was given to me by a friend in Canada (Bobby Burrell) in February 2011. For whatever it is worth, when I purchased my Montreal Canadiens Blinker in 2013, the woman I purchased it from swears that her father obtained it in 1964.

NEW UPDATE= As of December 2019, after a recent sale of a Detroit Red Wings Blinker doll, I was told that the original owner of the Red Wings doll purchased it at the old Olympia Stadium in Detroit in the 60's.   There now exists 2 different point of purchase accounts that can't be verified. We may someday find the truth about the origin of these blinker dolls. FYI - the Olympia Stadium in Detroit closed 1979.

The dolls are made of composition and have a white sticker on the bottom that has "JAPAN" stamped on it. They are 7 1/4" tall. Head is 2 1/2" in diameter and 3" tall. Each doll has a 7/16" diameter eye glued in position that blinks when moved. The dolls have decals on their backs & on one on the shoulders. The Detroit Blinker that I have, has an "A" on the chest. The chest decals used on the dolls are the same type that is used on the Regular, High Skate & Gold base doll series. They are about 13/16" tall. The blinkers use a "straight coil" type spring for the head

Notice the numbers on the shoulders. The #1 on the Toronto goalie & the #12 on the Boston were hand painted. 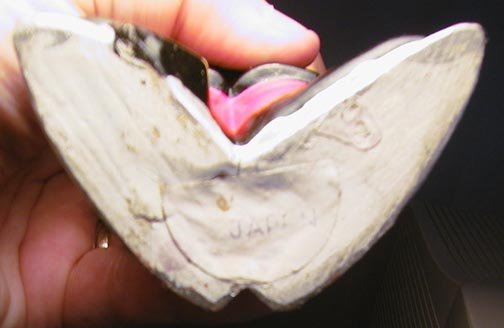 (notice the word "JAPAN" on the paper label) 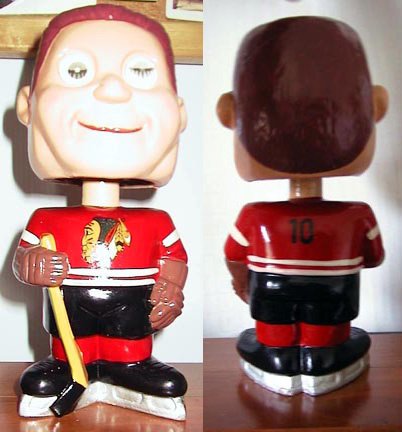 CHICAGO BLACKHAWKS "BLINKER" I was told by a fellow collector, that the same doll is on display in the Hockey Hall of Fame in Toronto. After contacting the H.O.F., I was supplied with a picture, shown below, by Stephen Ward who was their coordinator of new business and E-Business (8/2001). He said the doll was in the Household Family Zone display called the "Attic". It showed a typical Canadian family around the television set watching "Hockey Night in Canada" on a Saturday night during the 1950's. There exist actual footage of 50's NHL games; with Foster Hewitt doing the play by play, and advertisements on the television. 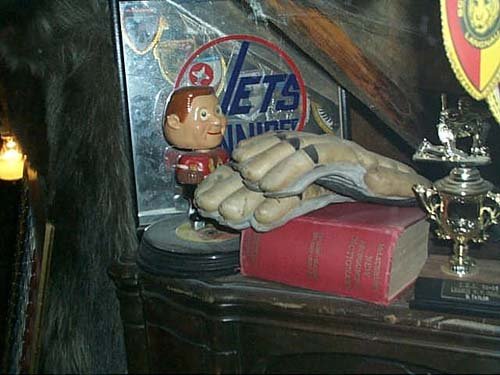 Picture of a Chicago Blackhawks doll on display in the Hockey Hall of Fame in Toronto, Canada 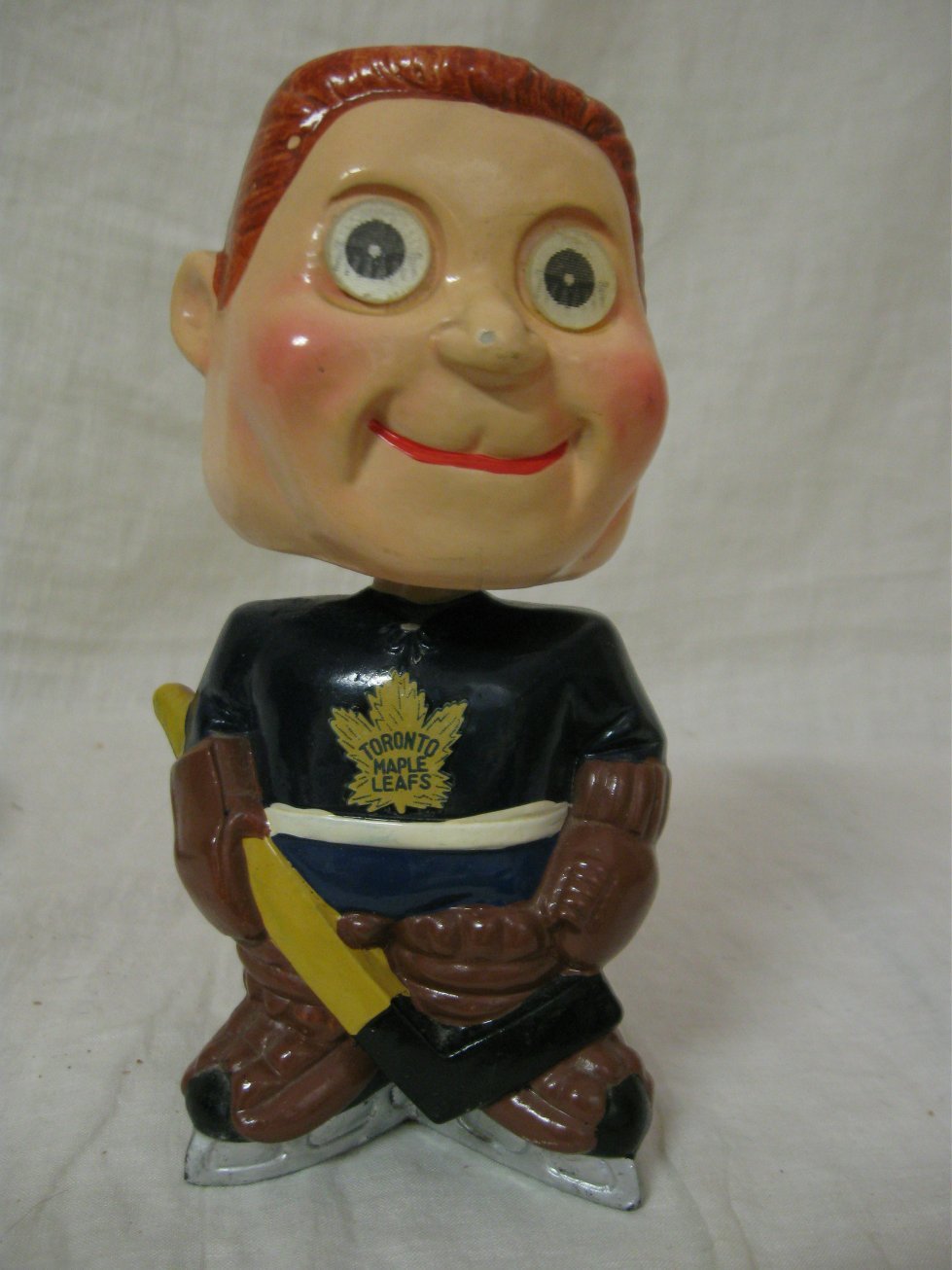 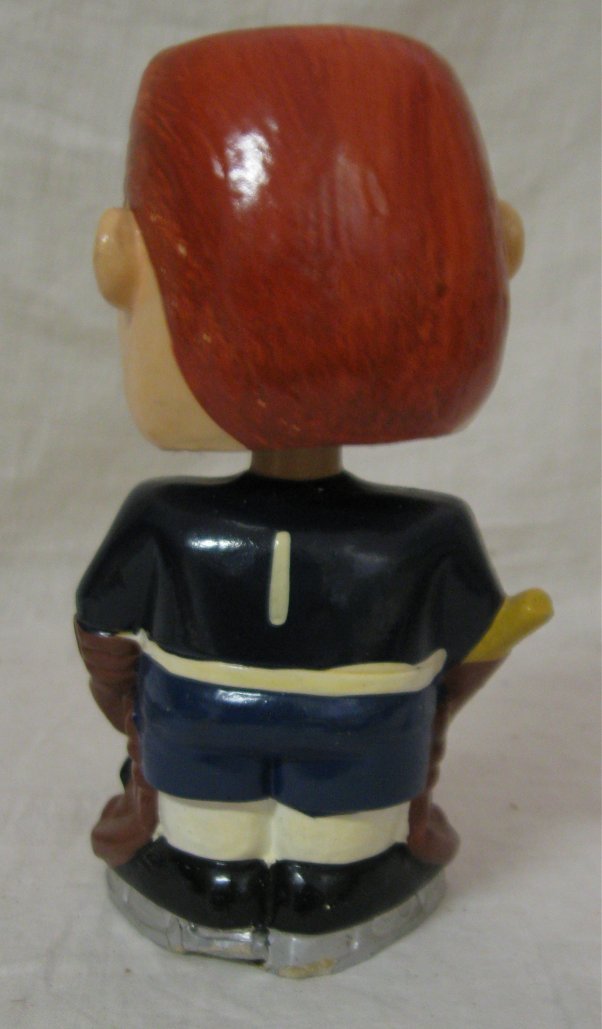 Toronto Maple Leafs GOALIE Blinker -  I do not know if there were blinkers for the other teams. 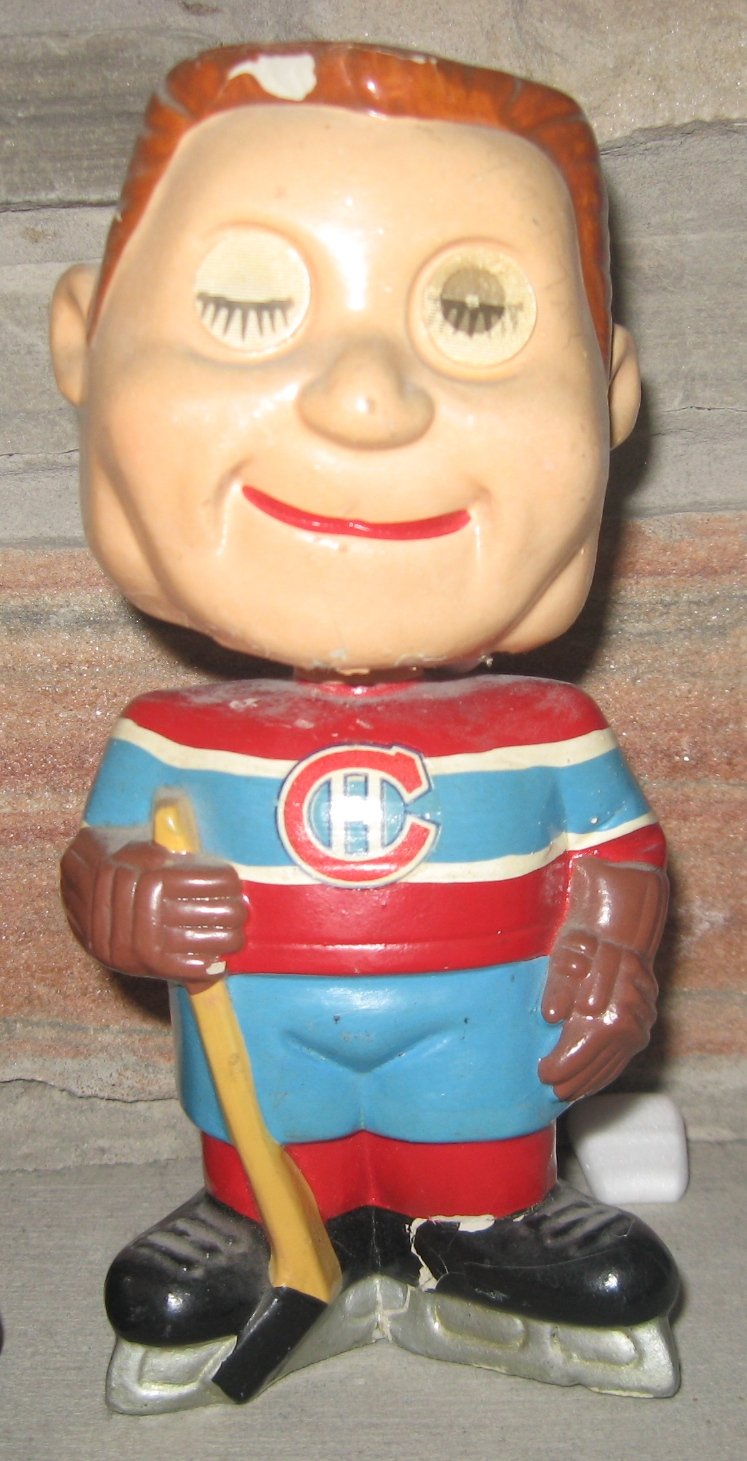 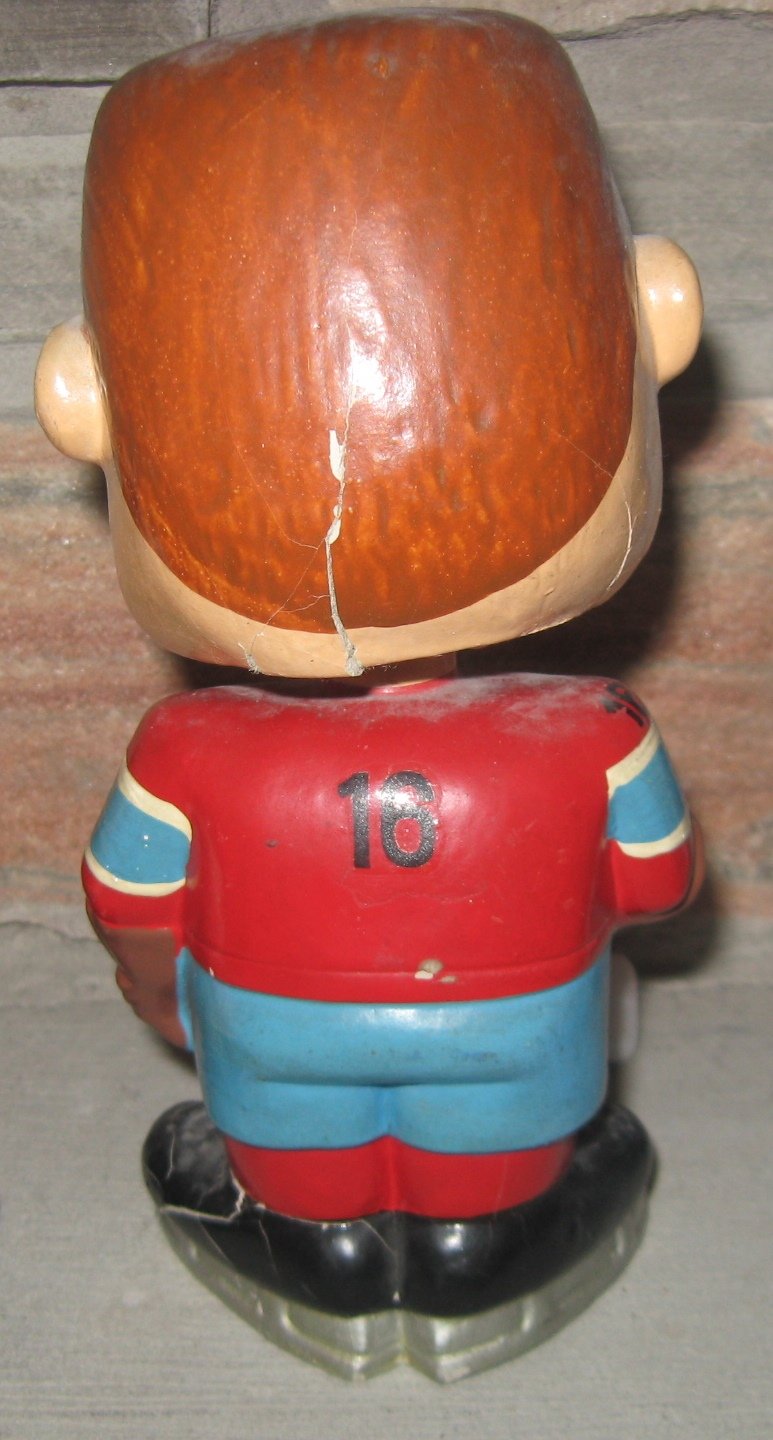 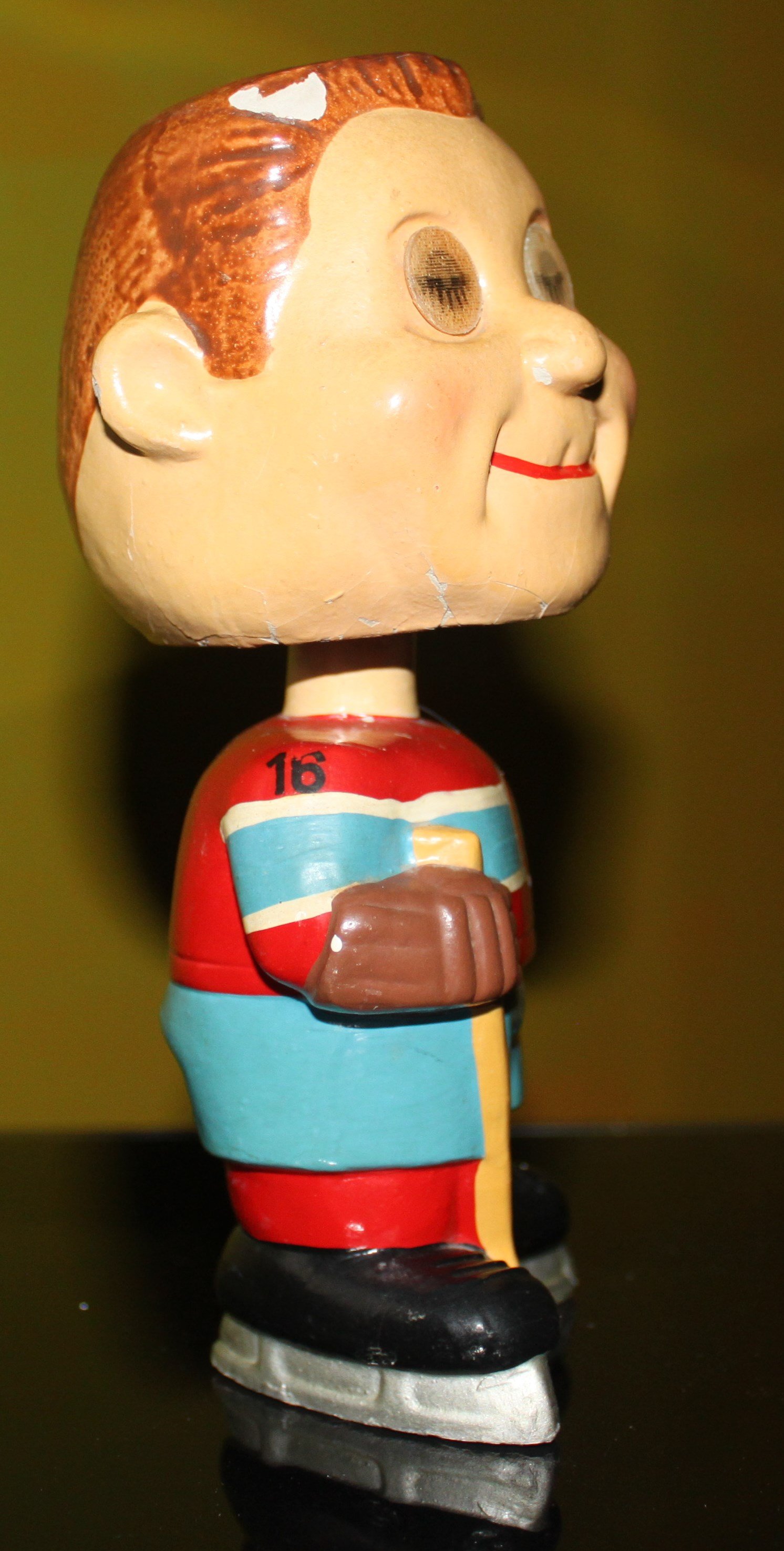 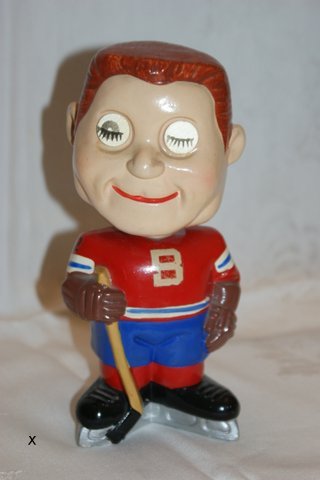 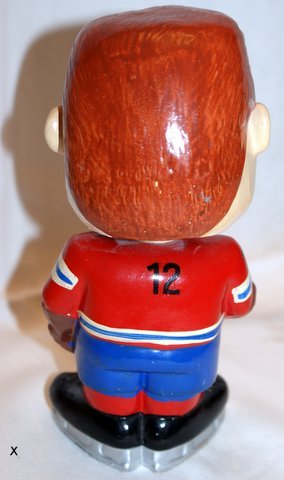 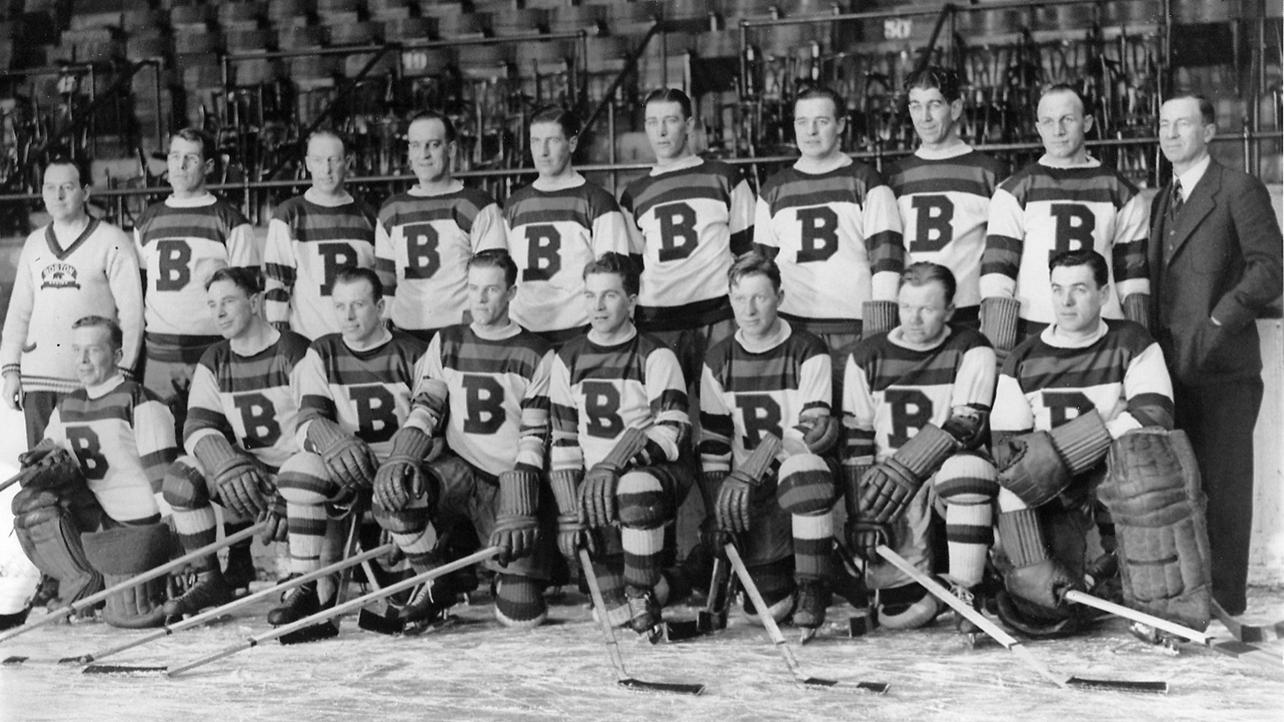 Picture above shows the Boston Bruins uniform in the years 1932-34. Notice they had a plain "B" on the jersey! 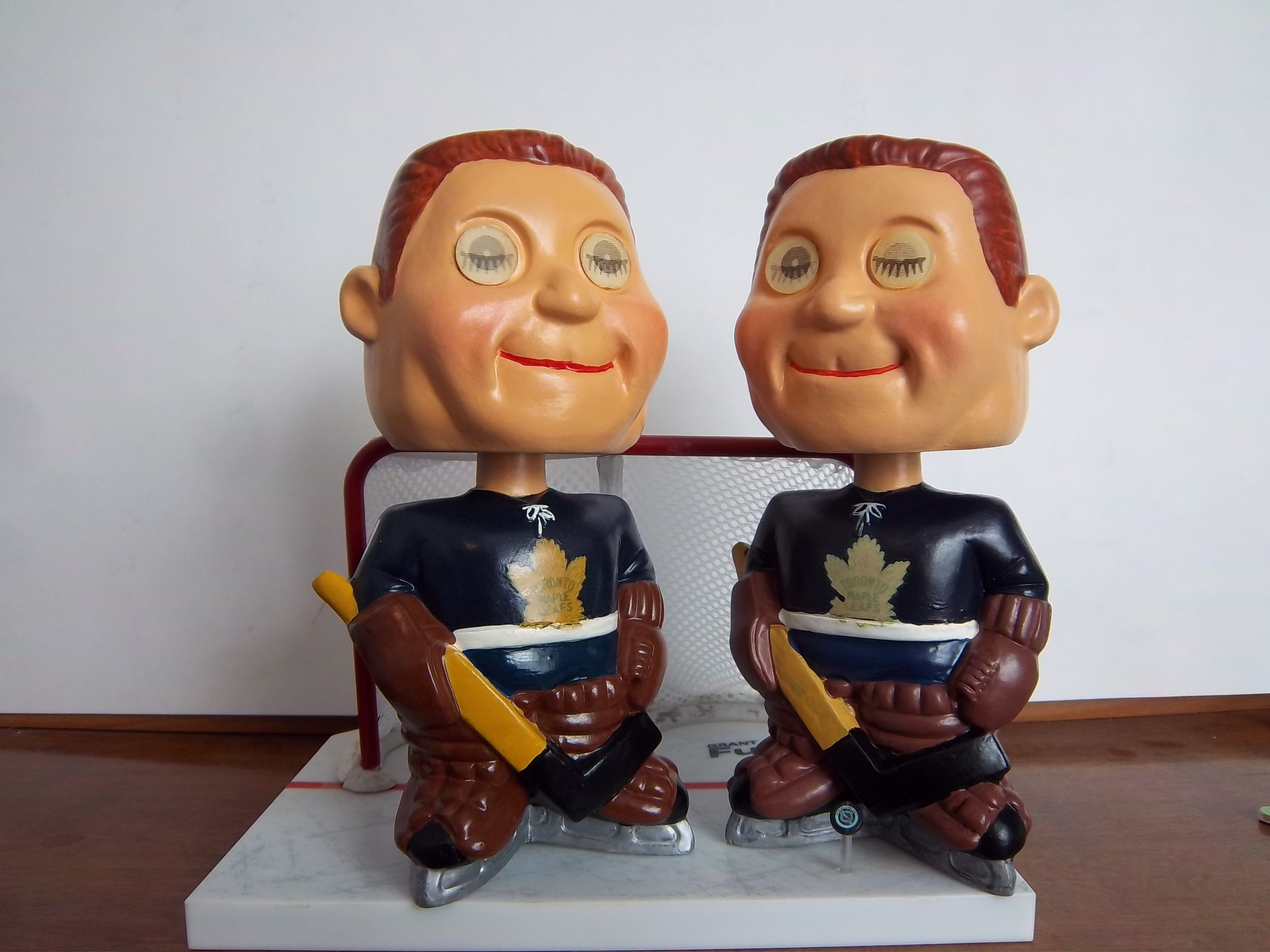 I THINK THESE BOYS HAVE THE NET COVERED! 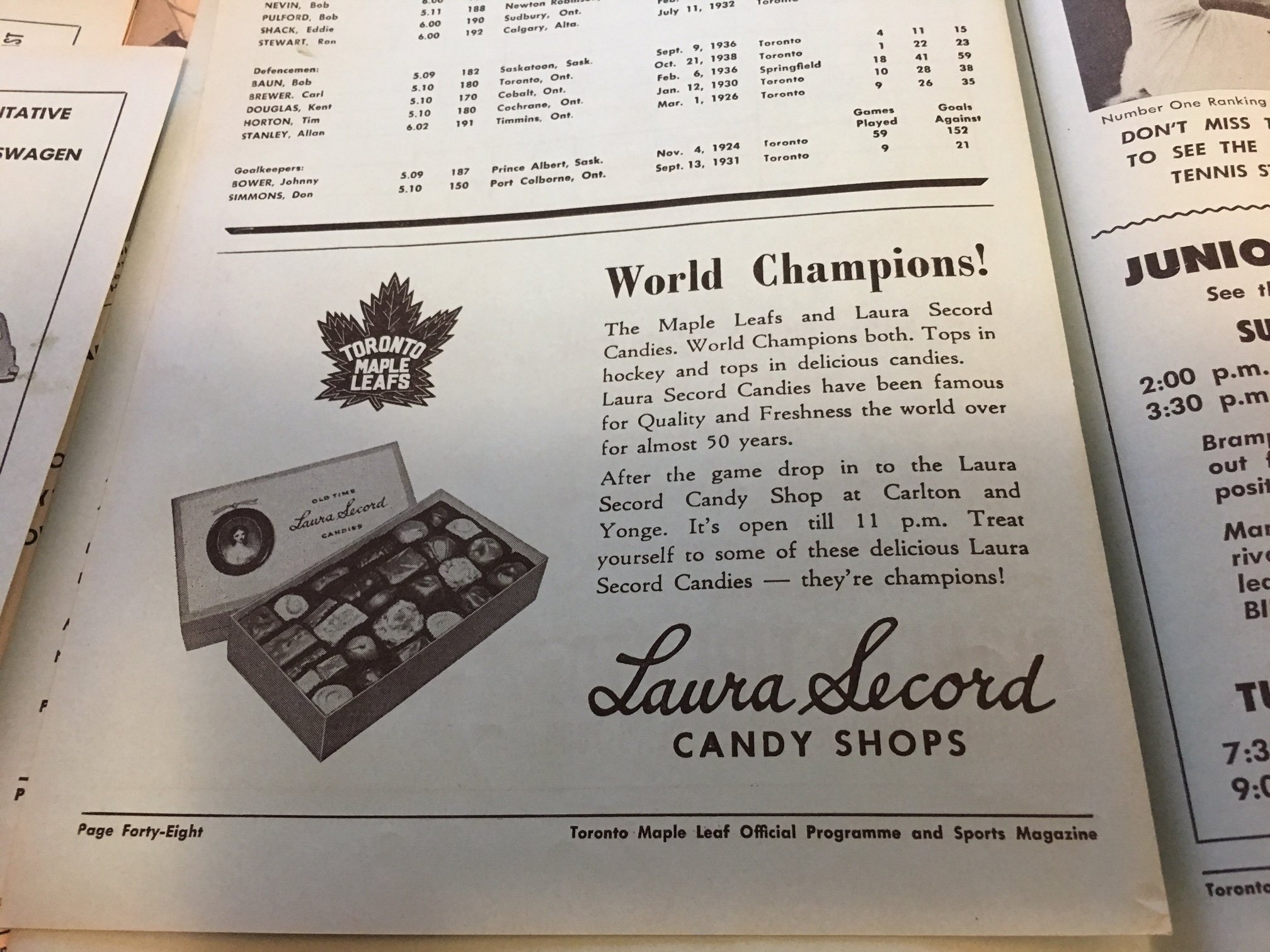 Picture above is a LAURA SECORD ad from a 1963 Toronto Maple Leafs hockey program.

Although it doesn't mention anything about bobbing head dolls, It does show that the company used the game of hockey to advertise or promote their products.

I, along with other people in know of the hobby, have written or called the Secord company several times and have not been able to determine whether or not the company was involved with the distribution of the Blinkers.