PATENT = (according to Webster's dictionary) "an official document open to public examination and granting a certain right or privilege; letters patent; esp., a document granting the monopoly right to produce, sell, or get profit from an invention, process, etc. for a specific number of years".

If you own any 1960’s baseball bobbing head dolls, you may have noticed that the bottom of their bases is stamped JAPAN PAT. #______ along with a 6-digit number. I have only observed this 6-digit patent designation stamped on the underside of bases in the "GREEN BASE" series baseball dolls manufactured from 1963-65. Note the stamping on the green base New York Yankee doll depicted in the picture below. I have never seen these designations on the hockey bobbing heads that were produced in Japan during the 1960s and early 1970s. I recently realized that my football kissing pairs each have a patent sticker with 2 patent numbers on the sticker= 714536 and 713549. I assume there where 2 patent numbers established - one for the majorette and one for the football player. The numbers must be incorrect because when I researched them, the patent applications depicted a woman's purse & some kind of square container. However, in a later search I did find patent 225950 that contains images depicting a majorette or cheerleader. It was exciting for me to find a hockey patent and to be able to validate the "1962" year designation on the base of a doll that is part of the REGULAR series of hockey dolls. This 1962 JAPAN stamp is evident on the bottom of the red base of a REGULAR series hockey doll presented in the picture below. 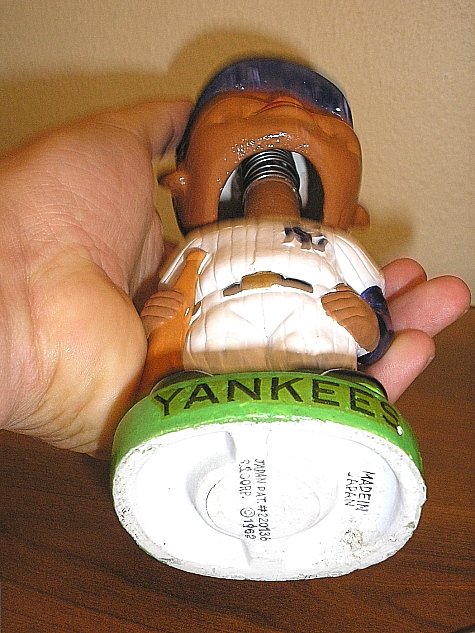 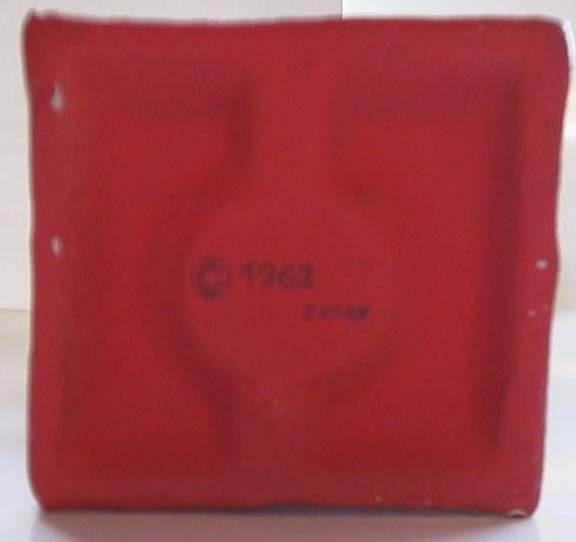 NOTE: It appears that the Japanese used their patent designations across doll styles and teams. A perfect example is the Blackface NY Yankees (green base) doll pictured above. It has patent number 220136 stamped on its base and the same patent number (220136) is also used to represent the St. Louis Cardinals white base doll depicted in the section below containing links that can be used to view the various patents that I have researched. It also appears that the Japanese did not stamp the patent number on any of the color base, white base, minis, gold base or wedge base series baseball dolls. I own two WHITE base Detroit Tigers dolls, and neither was stamped with the patent #220137 as you will see in the application below.

I have provided translations of various Japanese symbols & text in the graphic presented below. (Many thanks to a Japanese co-worker who helped me with the translations). The patent application date was December 18th, 1961. The patent was registered on November 20th, 1962. On the various patent applications listed below, you will notice that the Japanese used a YEAR - MONTH - DATE dating system. They also used a different numbering system for the year. This system, the Japanese Showa Calendar, represents years from 1926 thru 1989. I used a Japanese / Christian Era Conversion Chart to convert the SHOWA Calendar designations "36" to 1961 & "37" to 1962. I have included a copy of this chart for anyone who is interested. The pictures in the patent application capture the design of the figure. I cannot see any team logos or decals in the pictures. Interestingly, on all the patents that I found, there is no reference to a team or the sport. They were not even called BOBBING HEAD, BOBBER or NODDER. According to a person I contacted at the Japanese patent site, the dolls were classified as an "Ornament" in the style of a person. Unfortunately, the text that accompanied with the original patent applications was not available on the Japanese patent website I used to perform my search. In most of the links containing patent information below, I was able to determine the team from the mascot head depicted in the graphic. In addition, the figures in the illustrations all had square bases.

My baseball & football bobbing head collections are not that large compared to my hockey doll collection, so the patent designations listed below are limited. Please take a look at your collections and, if you find a 6-digit patent number that is different from what is presented here in this section of my website, I would appreciate you passing it along to me. I will find the patent artwork and add it to my website for other collectors to see. Thanks in advance for looking! I would like to thank my good friend & bobbing head collector Frank Parrella for helping me search for bobbing head patents on the Japanese patent website. There are over 12 million patents registered on the Japanese patent site starting from 1921 so obviously we did not look at each patent. 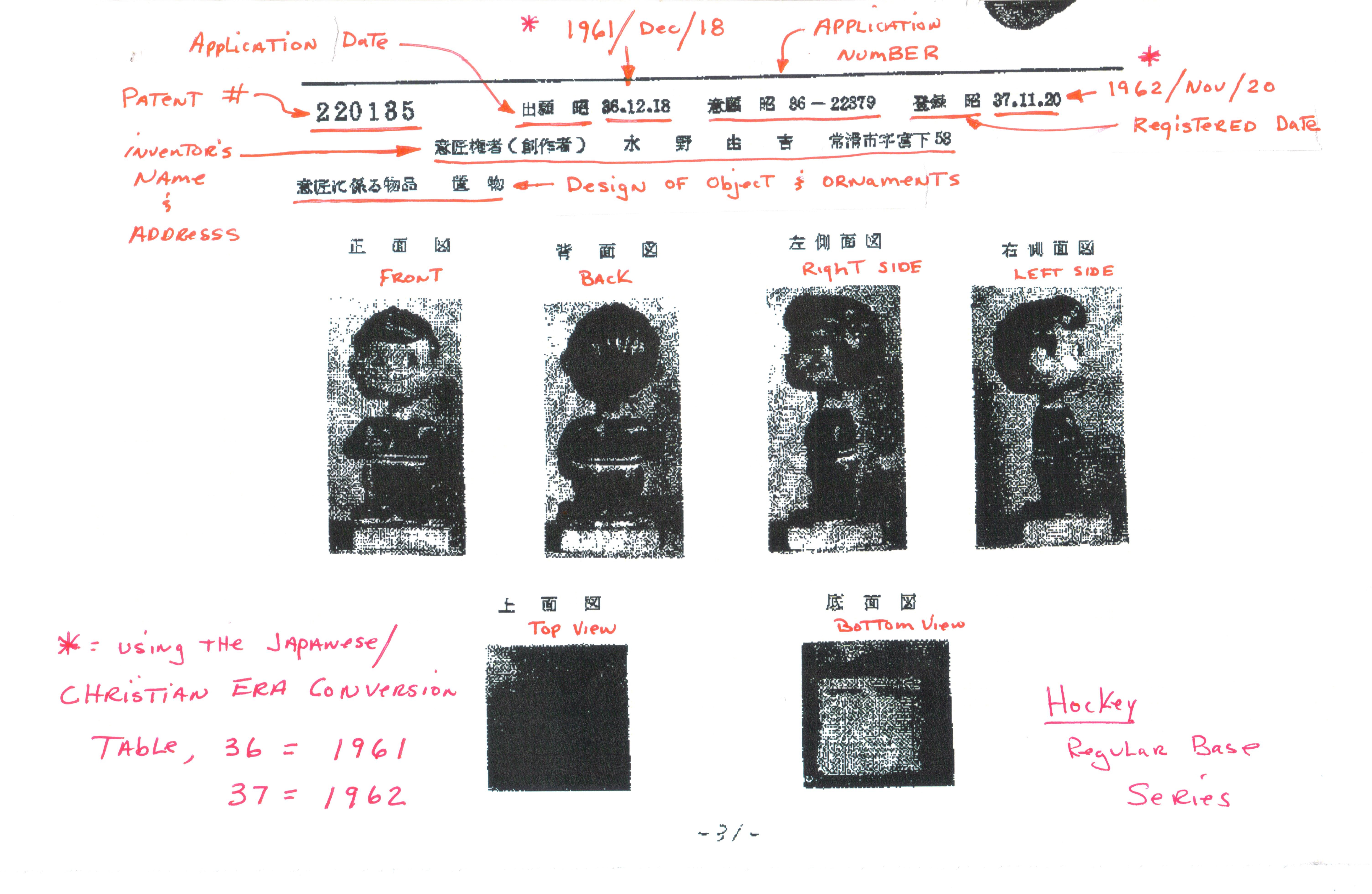 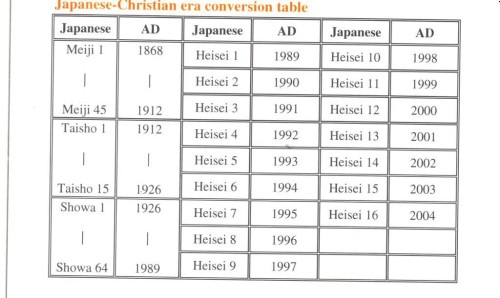 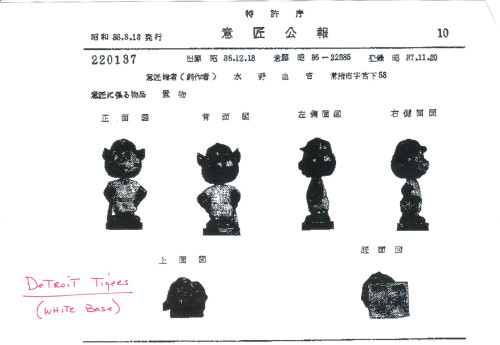 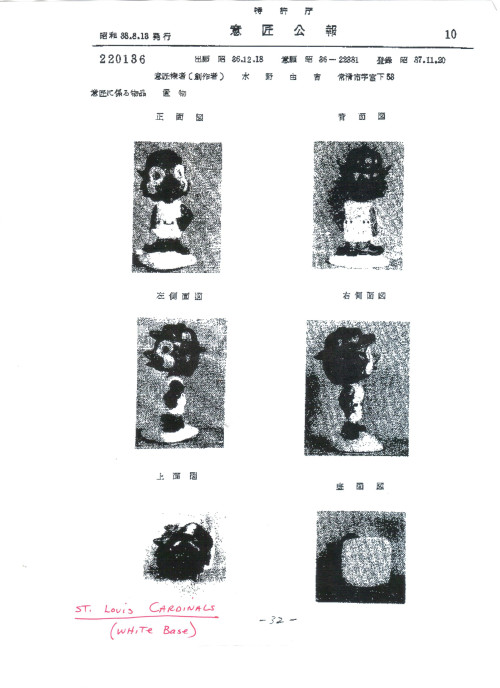 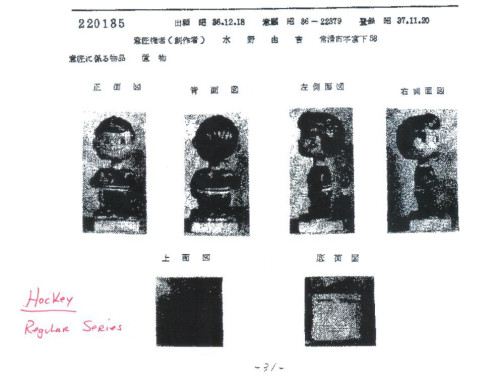 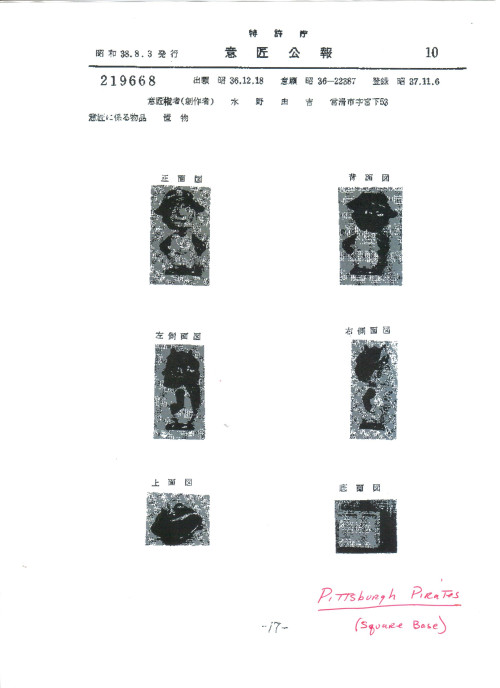 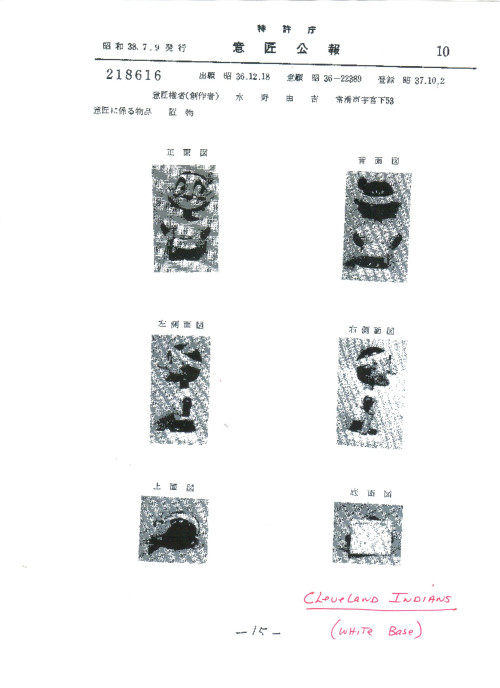 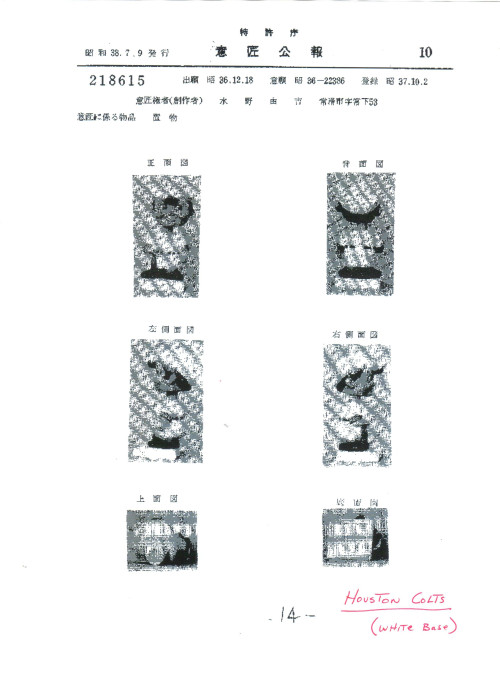 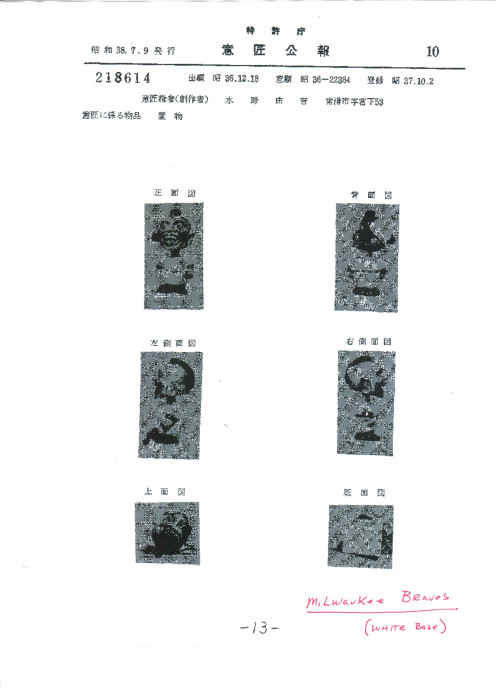 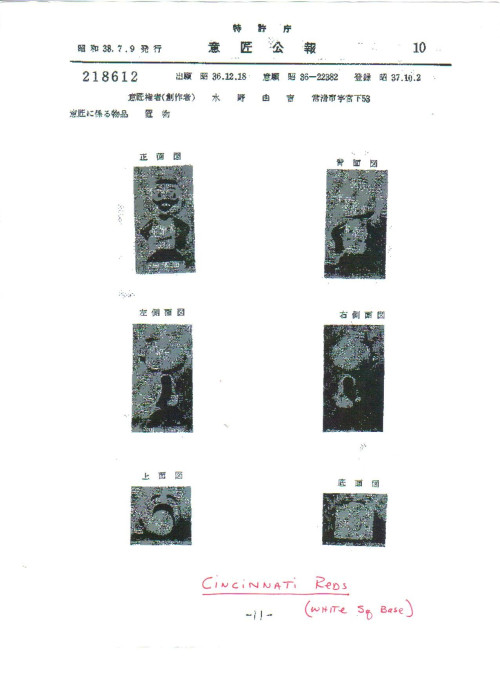 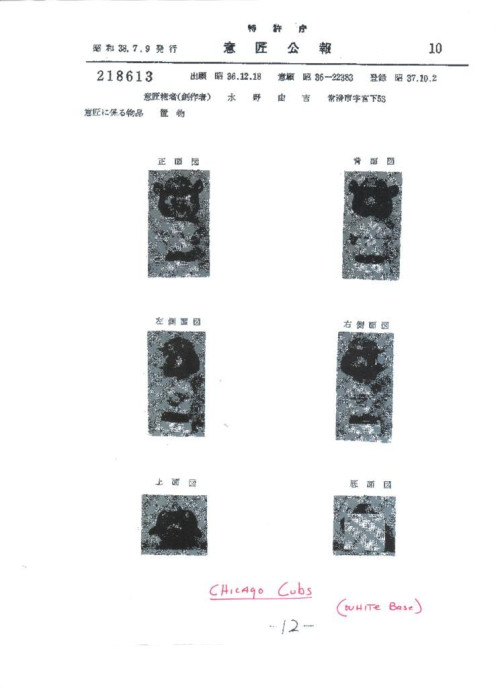