These dolls were created in Japan from 1961 through the mid 1970's. They were manufactured by Lego, a Japanese company, which created the molds for the dolls and then painted and assembled them. These dolls were made from Papier Mâché. The term Papier Mâché (pronounced póp-ee-ay mash-áy) comes from the French phrase meaning "chewed paper.". Papier Mâché is made from newspapers and paste.

Lego originally made an agreement with the souvenir and concession giants - Sportservice Corporation and Bobbie Enterprises Inc. (Buffalo, N.Y...). Later, Sports Specialties (Los Angeles, Ca.), T.J.B. ENT. INC. (Boston, Ma.), Tex Coulter Enterprises (Montreal, Canada), CPSE LTD. (Cleveland, Ohio), The Pro Market (Chicago, Ill.), NANCO-Nancy Sales Co. (Boston, Mass.) and Mascot Sales ((Montreal, Canada) were also added to the list of companies that either imported or distributed the dolls in North America. The Sportservice Corp. bought out the Bobbie Enterprises Co., which was owned by the L.A... Rams football team in 1962-63. Dolls were retailed for $1.00 to $1.75 each. The "Lego" name was not put on hockey dolls. The "Lego" decal or name was used on the Baltimore Orioles GREEN base baseball dolls & all the Peanuts cartoon dolls. (See picture at end of page for an example of a "Lego" sticker.) 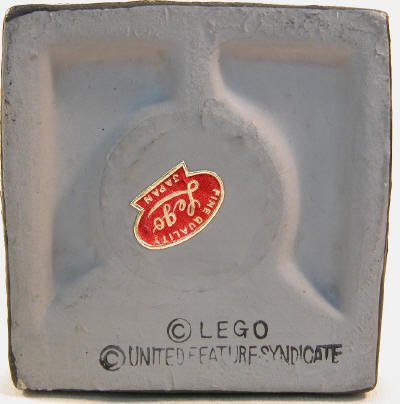 This is an example of a "Lego" decal and stamping on a 60's  Lucy  (Peanuts) character doll. Hockey dolls did not have a "Lego" decal or stamp on their bases. Decal reads =
FINE QUALITY
Lego
JAPAN