These dolls were also known as the Realistic Series. Their faces depict a "realistic adult male". They have a different presence, more mature than the other dolls. Some collectors say the faces were modeled after Gordie Howe of the Detroit Redwings.

Most of the Gold Base series dolls were created between 1967-1968. The exceptions are the Salt Lake City and San Diego Gulls dolls that were made somewhere around 1969-74. I make that decision on the fact that both teams played in the WHL between 1969-1974. The dolls stand 7 1/4 inches tall and have a 3 x 2-inch oval base. These dolls have decals on both the base and chest. The "Original 6" teams had a gold ROUND shaped sticker on the bottom which says, "Sports Specialties 10203 Santa Monica Blvd Los Angeles, Calif. 67 - Japan". The Los Angeles Kings and the San Diego Gulls "red pants" version dolls have a gold OVAL shaped sticker with the same information. Both of the St. Louis Blues dolls had "1968 & MADE IN JAPAN" stamped on the bottom of the bases. The Salt Lake City Golden Eagles doll had a ROUND gold "Sports Specialties" similar to the "Original 6" teams (see pictures below). The Gold Base dolls used a straight spring that had 8 - 10 coils. In regard to their boxes, I was told by Tim Hunter that the Gold Base dolls were sometimes shipped in a large crate style cardboard box that held 6 or 12 dolls at a time.  UPDATE = In Tim Hunter's very last auction (11/02) as a bobbing head dealer, he offered a Toronto Maple leafs gold base box. The box was nothing special - plain white cardboard except for being a bit oversized and "TORONTO" stamped at the end." Since then, i have seen a few boxes for the gold base dolls. Some have a white and blue sticker with the team's name called out.

As most bobbing head collectors or dealers are aware of, the "67" on the gold stickers on the bottom of the base on these dolls was not the year that they were produced. It was the postal code for Los Angeles, California. Considering the small size of the sticker on the dolls, it was just an abbreviation for the zip code for Los Angeles, which was 90067. For your information, according to a book at the post office, zip codes came out July 1, 1963.

As stated above, the Gold Base series dolls included 2 of the 6 expansion teams: the KINGS & the BLUES. The six new teams 1967 were the California Seals, Los Angeles Kings, Minnesota North Stars, Philadelphia Flyers, Pittsburgh Penguins, and the St. Louis Blues. No one seems to know why the other 4 teams were not include in the set.

PROTO-TYPE DOLLS I was told by Tim Hunter that he saw 2 PLASTIC bobbing head dolls at the Cleveland National show (8/01) that were molded exactly like the Gold Base series dolls. He saw a Boston Bruins and Philadelphia Flyers doll. They even had the realistic shaped head and face. They have decals on the chest and base. Plastic dolls, for baseball and football, started to appear in the mid 70's so these may have been prototype dolls for hockey which never took off. UPDATE = (8/02) I was fortunate enough to find the Philadelphia Flyers PLASTIC doll at the National show in Chicago. Unfortunately, it did not have a head. But for $20, I thought it was worth it. There are no markings that indicate the year made or the company that produced it. Notice the "NHL" sticker on base! (See pictures below)

The Salt Lake City Golden Eagles is my favorite. It uses the standard oval gold base body but a unique head. Notice the head and face features, black eye and a Band-Aid over his nose. It is one of the few dolls that had a number decal. It has a #7 on the shoulder and back. Considering when the team played and that the team changed its logo and colors for the 1972-73 season, the doll probably came out between 1969-1972. (See pictures below) 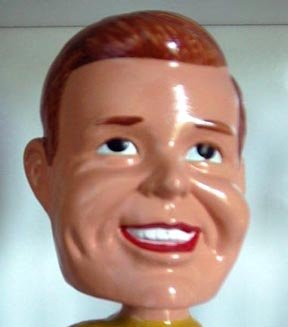 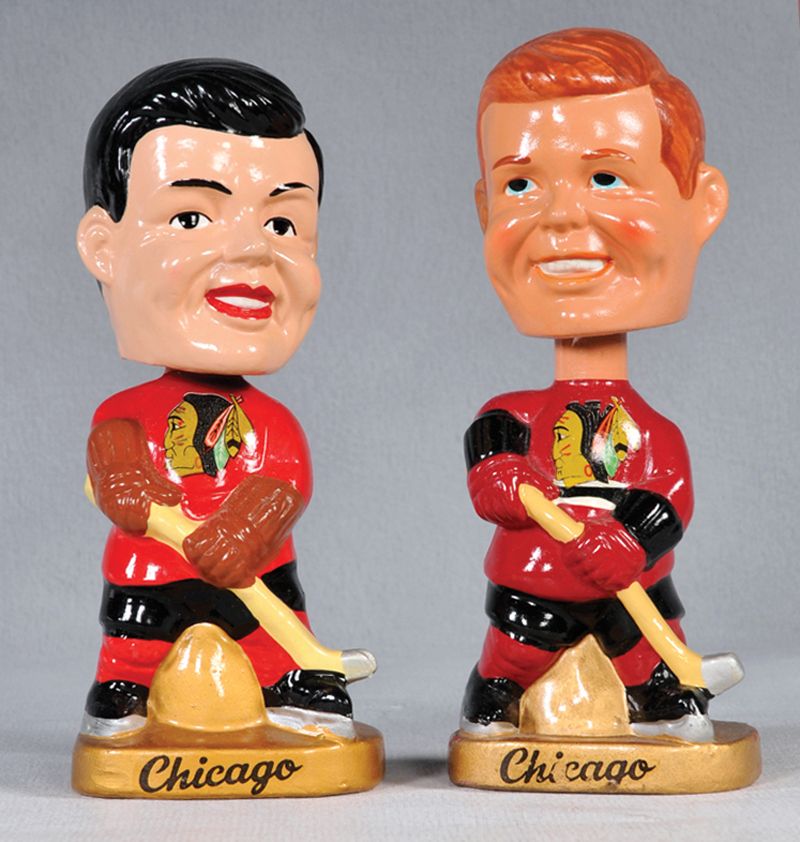 Notice all the differences=

*  Color of the uniforms, skin, lips and hair.

*  Color of gloves & how they were painted

*  How eyes were painted & highlighted 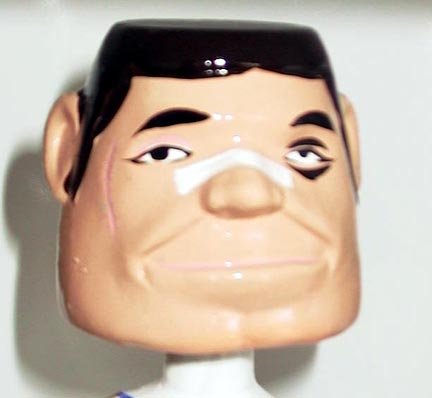 (Notice the Band-Aid on his nose, scar on left cheek and black eye!) 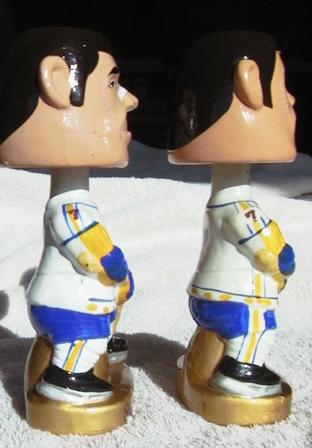 Notice how 2 different dolls were painted. Trim on back of jersey; stripe on

side of pants & leg; white paint under #7 decal on shoulder. 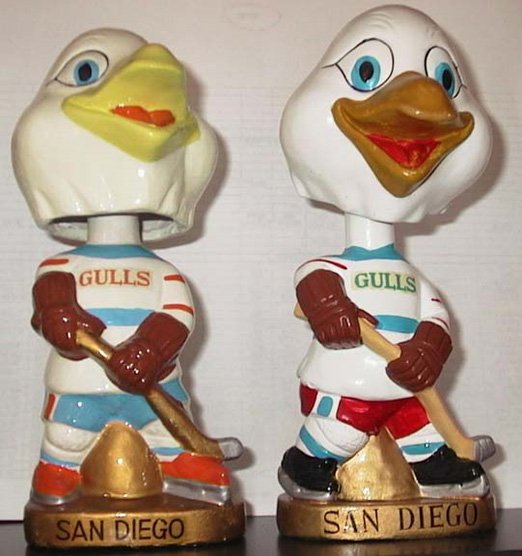 & Shape of the legs, feet and hands. The mouth on heads were different.

Decals on base were different size & font. 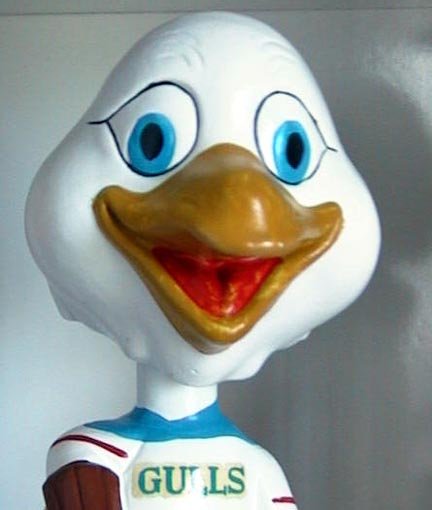 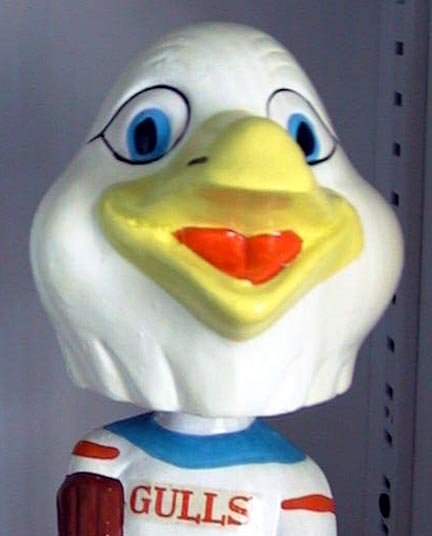 I want to thank Steve Smith from the San Diego area for information & the pictures of the box. 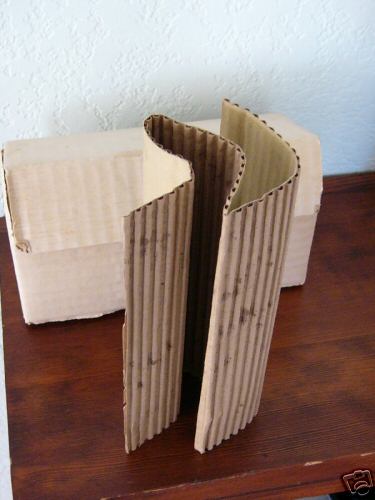 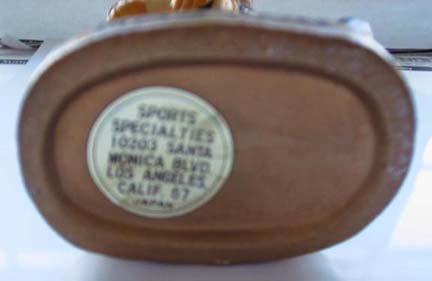 Typical gold base bottom
(Notice the bottom has a ridge or rib around edge & a round sticker). 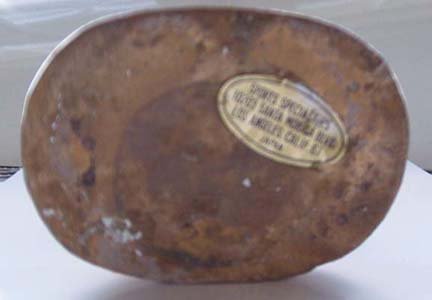 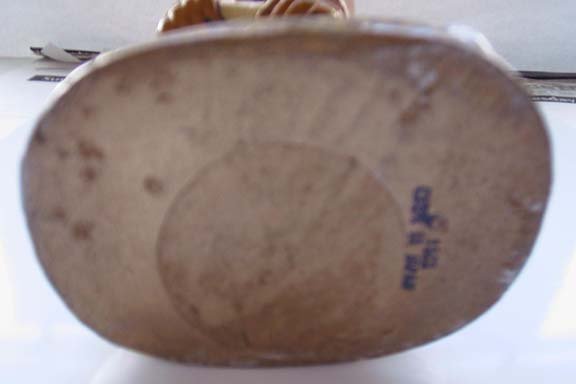 Both of the St. Louis Blues dolls used a "Flat Bottom" designed mold, gold and blue variations
(Notice the 1968 & Made In Japan stamp)

(Notice the "NHL" sticker between the legs!)

Philadelphia entered the NHL in 1967. 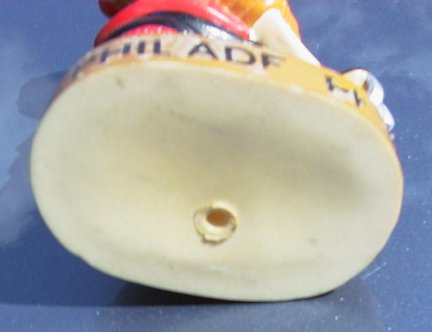 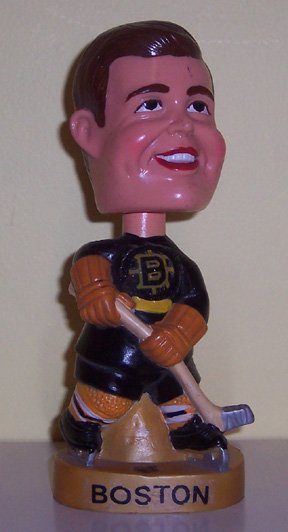 Apparently, these dolls were considered for an NHL set; same as dolls that were released for the Major League Baseball and the NFL in the early 70's. Obviously it was never produced. This Bruins doll was a prototype for the set, featuring the same mold as the 1968 Gold Base set. 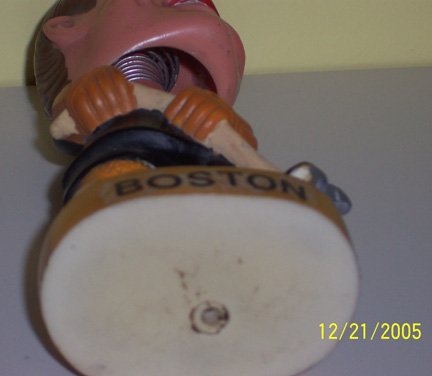 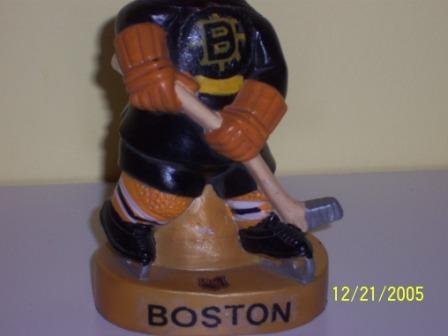 logo was made of a clear sticker material. They were not decals like the normal dolls. 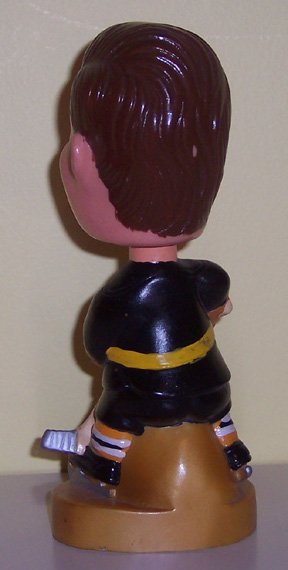 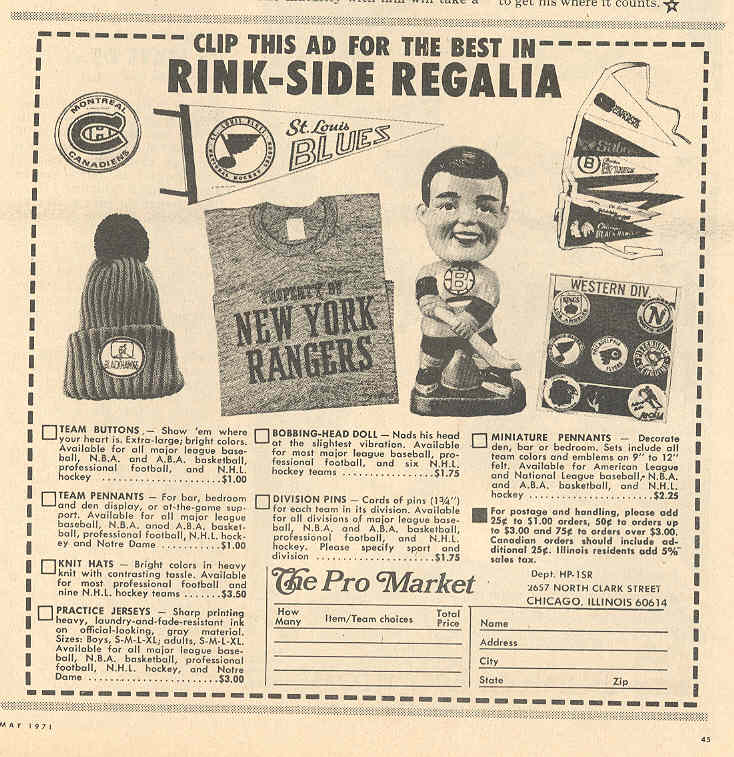 This is first example of an ad for a Gold Base series doll that I have ever seen.

Notice that the doll sold for $1.75 and that the listing mentioned dolls for 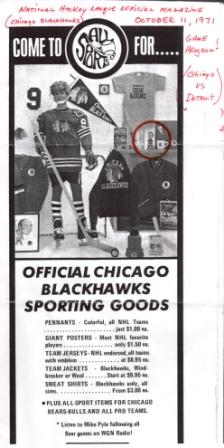 This is a 1971 ad for Chicago Blackhawks merchandise by a store called "ALL SPORTS" in Chicago.

It shows a Chicago Blackhawks Gold Base series doll. See "RED" circle.
(Picture sent to me by Karen Becker) 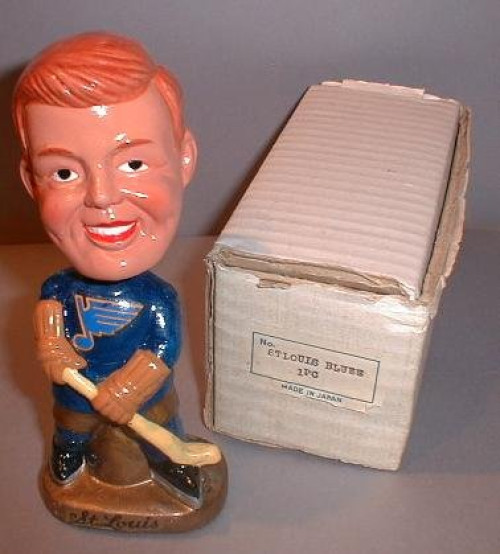 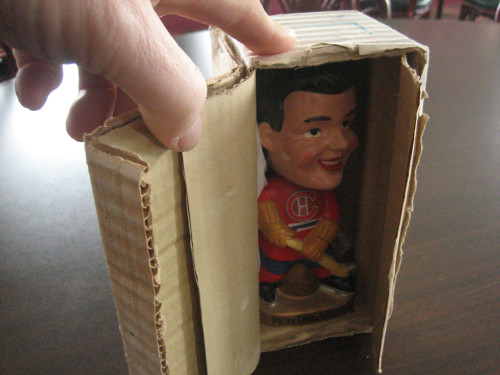 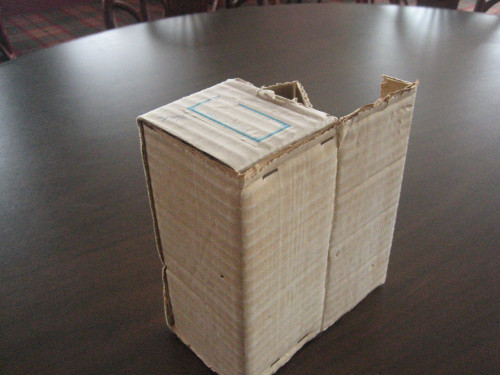 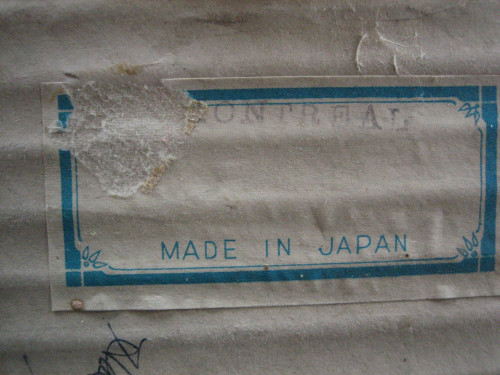 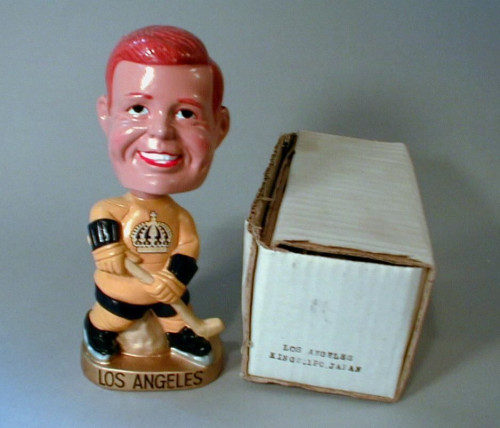 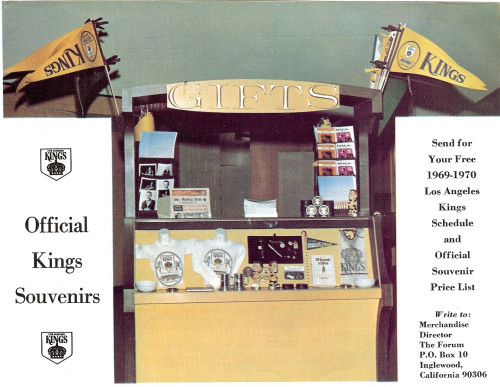 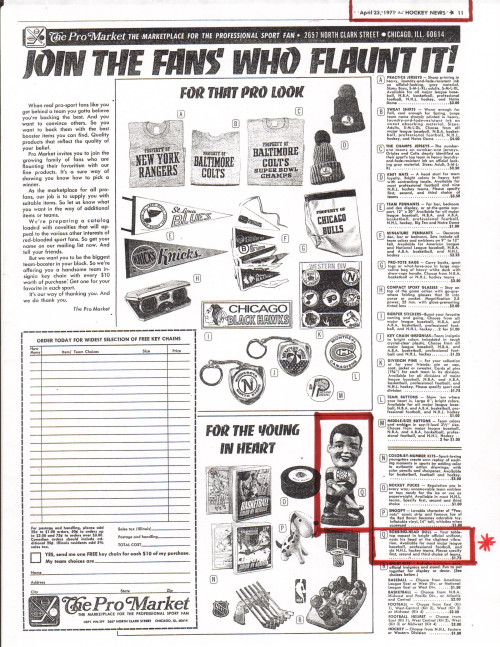 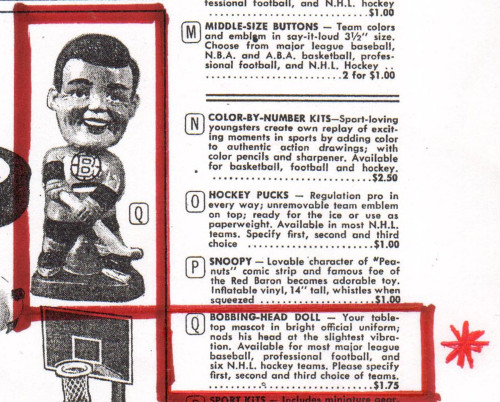